Should I stay or should I go? What the graduate voice tell us

Graduate Outcomes’ unique mix of factual information and graduates’ own assessments means it can tell us something about the design and nature of jobs themselves. HESA researchers have created a measure of a key aspect of job quality and revealed how this varies across the UK.

If you’re employed, the survey asks you for your own opinion about your job. It asks if your work is meaningful to you, whether it fits with your future plans, and whether you’re using what you learnt in higher education. The point of these ‘graduate voice’ questions is to capture your own assessment of what constitutes success after finishing your course.

By themselves these answers give fascinating insights that go far beyond job titles and salaries, and you can see how previous graduates answered these questions in the published survey results. But taken together these questions also give a really useful measure of the design and nature of work, or ‘fair work’. This is a component of employment quality which encompasses employees’ feelings of purpose as well as their opportunities to use skills developed through study and progress in the workplace.

When we shared this research with the education sector the one question that came back most often was “how does this fair work measure vary across the country?”. 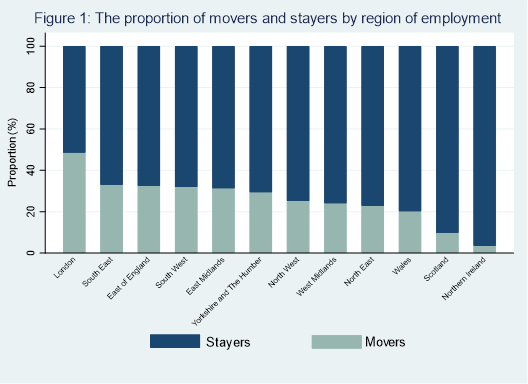 The geography of fair work

Looking at the fair work scores we found that in all English regions, the movers had given higher fair work scores for their jobs than the stayers, as we see in Figure 2. Interestingly this wasn’t the case for Northern Ireland, where stayers gave their work higher scores on average than the movers did. However, in Northern Ireland (as well as Scotland, Wales and Yorkshire and The Humber in England), the differences between movers and stayers could just be due to chance.

The lowest fair work scores were given by graduates who lived in London before higher education and stayed in London to work. Despite the higher salaries often found in the capital, even the movers to London reported lower fair work scores than the national average for movers. 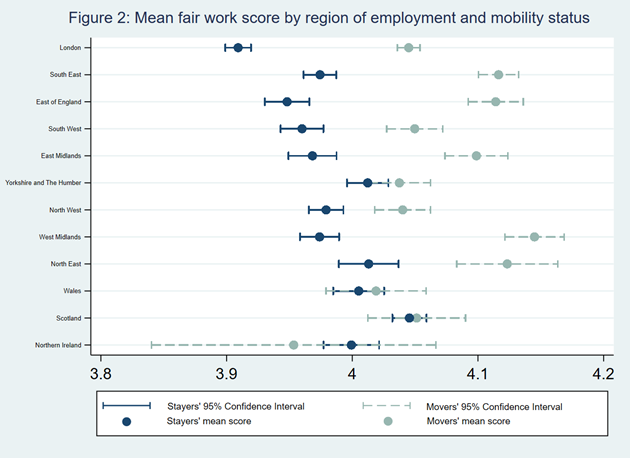 Notes: Possible fair work scores run from 1 to 5. The chart axis does not start at 1. In Graduate Outcomes, we only receive responses from a proportion of the entire graduate population. Had we run the survey again, different graduates might have responded and the mean estimates for fair work in each region could have been different. The ‘confidence intervals’ illustrate the range in which the mean value among the broader graduate population is highly likely to lie.

Next steps for the fair work measure

Hopefully you found this as interesting as we did, but we hope this is just the start for this kind of analysis.

Clearly this piece uses large regions and doesn’t capture graduates who move within regions, or from rural to urban areas. So geography-lovers can expect more detail in future. But geography isn’t everything and we’ve plans to compare the fair work score with other employment data like salary, industry, occupation and graduates’ reasons for taking their jobs in the first place.

All this research and analysis will help policy makers and employers to better understand how to ensure all graduates are able to access fair work. By answering the graduate voice questions in the Graduate Outcomes survey, you can make a real impact on the future of decent work for graduates. If you’ve not yet received the survey, find out when you will in our FAQs and if you’ve received an invitation by email, SMS or a phone call, please take part today.

You can read a more detailed version of this blog, with the full data table on the HESA website: Regional variation in the design and nature of graduate work: a first look.